In September, State Representative Daryl Metcalfe toured the facility and met with the management team regarding current business issues. In October, Senator Bob Casey visited 3RP to learn more about the legislative issues facing the pharmaceutical industry today and to offer support for growing businesses in Pennsylvania.

Three Rivers Pharmaceuticals supports strong relationships with government officials since the industry is heavily regulated and with their assistance the pharmaceutical industry can bring life saving and cost-effective medicines to patients. In addition, government also offers small growing companies the funding assistance needed to expand and continue building successful businesses and bring employment opportunities to the community. 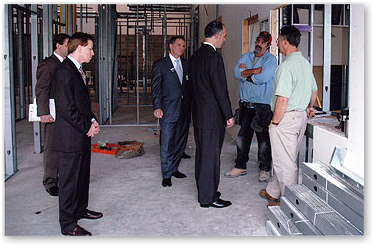 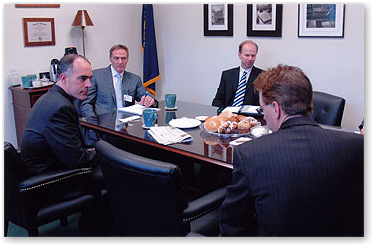 Donald J. Kerrish, RPh, President and CEO of Three Rivers Pharmaceuticals, LLC will be speaking at Duquesne University for students of the Mylan School of Pharmacy on Wednesday November 15th from 12-2pm.

Mr. Kerrish, a Duquesne University Alumni and Member of the Mylan School of Pharmacy Advisory Board will be speaking on the topics of Pharmaceutics and Drug Development.

Ernst & Young LLP today announced the winners of the Ernst & Young Entrepreneur Of The Year(R) 2006 award in the Upstate New York and Western Pennsylvania region. This year’s award winners were recognized at a special 20th anniversary gala event at the Pittsburgh Hilton with more than 540 people in attendance.

Three Rivers Pharmaceuticals, LLC announced today that it has completed the acquisition of worldwide ownership of Amphotec® / Amphocil® (amphotericin B cholesteryl sulfate complex for injection) from InterMune, Inc. (Nasdaq: ITMN). Amphotec is indicated for the treatment of invasive aspergillosis, a fungal infection that occurs in immunocompromised patients. Financial terms of the agreement, which was signed and executed on May 20, 2005, were not disclosed.

The dismissal came at ICN’s request. Three Rivers obtained summary judgment of non-infringement in the United States District Court for the Central District of California in July 2003.

“The dismissal of the appeal by ICN validates our position that the case was without merit,” said Donald J. Kerrish, President and CEO of Three Rivers. The dismissal by ICN eliminates the risk of further litigation regarding this case.

Three Rivers Pharmaceuticals, LLC today announced that the U.S. Food and Drug Administration (FDA) has granted marketing approval for its Ribasphere® (Ribavirin capsules) 200mg in combination with interferon alfa-2b for the treatment of Hepatitis C (“HCV”).

The President and CEO of Three Rivers Pharmaceuticals, Donald J. Kerrish, RPh., stated, “The approval of Ribasphere® marks a milestone in the treatment of HCV. Ribasphere® is positioned to break down the economic barriers that have existed for the past decade in treating this chronic and potentially deadly disease.” Traditionally the cost of treatment for HCV can range from $20,000 – $25,000 annually. “Our aim is to bring affordable medicine to all individuals infected with this dreadful disease.” Mr. Kerrish continued.

“This victory for the approval of Ribasphere® did not come without a great deal of pain and persistence on the legal and regulatory fronts” said Paul F. Fagan, Executive Vice President and General Counsel of Three Rivers. The ANDA was filed with the FDA in July of 2001. During the past thirty-three months, Three Rivers has successfully battled multiple patent infringement lawsuits and overcome significant regulatory issues that both delayed and complicated the entry of Ribasphere® into the marketplace. Both Mr. Kerrish and Mr. Fagan agreed that enduring the long and complex process has been well worth it. They will now be able to see patients benefit from the fruits of the company’s labor.

Hepatitis C affects nearly 4 million Americans and 170 million people worldwide. HCV is responsible for 8,000 to 10,000 deaths per year in the United States and is the number one cause of liver transplants. HCV can also lead to cirrhosis, end-stage liver disease, and liver cancer. Over 30,000 new cases are diagnosed each year.

Ribavirin is a synthetic nucleoside analog with antiviral activity used in combination therapy for the treatment of hepatitis C.

“We will work diligently with the FDA to resolve any remaining labeling issues in order to gain final approval for RIBASPHERE® (Ribavirin, USP) Capsules 200mg”, said Donald J. Kerrish, RPh., Three Rivers Pharmaceuticals’ President and Chief Executive Officer. “With over 2.4 million patients infected with Hepatitis C in the United States, we are encouraged that there will soon be an affordable alternative available for patients. Three Rivers Pharmaceuticals will be working closely in this process with its marketing partner PAR Pharmaceutical, Inc.

Three Rivers Pharmaceuticals, LLC today announced that the United States District Court for the Central District of California granted its motion for Summary Judgment in the patent infringement case filed against it by ICN Pharmaceuticals.

The district court determined that the Three Rivers’ product did not infringe any of the patents asserted by ICN Pharmaceuticals in the litigation. This decision removes the final patent barrier for Three Rivers in its pursuit to manufacture and commercially market a generic form of the drug ribavirin.

Three Rivers, in conjunction with its marketing partner Par Pharmaceutical (NYSE:PRX), will not commercially launch their ribavirin drug product until receiving FDA approval and a final determination on the 180-day exclusivity period granted to generic filers under the Hatch-Waxman Act of 1984.

“We view this as a tremendous victory, not only for Three Rivers and Par, but also for the hepatitis C community. We are committed to providing affordable ribavirin to persons afflicted with hepatitis C.” said Donald J. Kerrish, President of Three Rivers.

Three Rivers was represented in this case by attorneys Steven A. Maddox and David L. Rosen, formerly of McDermott, Will, & Emery, now with GrayCary.

Ribavirin, marketed by Schering-Plough under the brand name RebetolÒ is indicated for the treatment of chronic hepatitis C and had U.S. sales of approximately $800 million in the past year.

Three Rivers is currently seeking approval from the U.S. Food and Drug Administration to manufacture and commercially market a generic form of the drug ribavirin.

Under the terms of the settlement Schering has provided a non-exclusive license to Three Rivers for all its U.S. patents related to this drug product. In return for this license, Three Rivers will pay Schering a reasonable royalty based upon net sales of its generic version of the product. The parties have been in litigation in the U.S. District Court for the Western District of Pennsylvania. The Agreement is subject to the Court’s dismissal of the relevant lawsuits.

Three Rivers is also currently in litigation with Ribapharm, Inc., regarding certain patents that Ribapharm asserts relate to ribavirin. A trial date in that litigation is scheduled for May 2003. Three Rivers does not have tentative approval from the FDA at this time, although the company anticipates an approval within a reasonable period of time. The product will not be launched until the Ribapharm litigation is satisfactorily resolved and FDA approval obtained.

“We are very pleased with the terms of the settlement. It places Three Rivers one step closer to providing an affordable version of ribavirin to persons afflicted with hepatitis C.” said Donald Kerrish, President of Three Rivers.

Rebetol is indicated for the treatment of chronic hepatitis C and had branded sales of approximately $800 million in the past year.

BurnsAdler Pharmaceuticals, Inc. announced today that it has entered into a long-term licensing and supply agreement with Three Rivers Pharmaceuticals, LLC for the company's Infergen® (interferon alfacon-1) product.

Begin typing your search term above and press enter to search. Press ESC to cancel.