In normal healthy persons, fungal infections usually heal spontaneously, are treatable, or remain latent. However, in persons whose immune systems are suppressed or compromised by disease or medication, or who are weakened by long term chronic illness, fungal infections can spread throughout the body through the bloodstream (fungemia), destroying vital organs. These infections, which would not normally affect healthy persons, are called opportunistic infections. All fungi can become opportunistic if conditions become conducive to their growth. Fungi which are present everywhere and commonly cause opportunistic infections include: Aspergillus, Candida, Mucor, and Cryptococcus.

AMPHOTEC is an FDA approved lipid form of amphotericin B indicated for the treatment of invasive aspergillosis, a life threatening systemic fungal infection.

UNIQUE LIPID-BASED DELIVERY SYSTEM
Amphotericin B is stabilized with cholesteryl sulfate in AMPHOTEC, a disc-shaped colloidal complex. Liver macrophages break down the AMPHOTEC complex and release amphotericin B, which binds to lipoproteins.

Lipoproteins carry amphotericin B to the site of infection, and the agent binds to ergosterol in cell membranes of infecting fungi. The membranes’ permeability is altered, intracellular contents leak out, and the fungi die.

AMPHOTEC is suitable for use both in patients for whom prior systemic antifungal therapy has failed and for those in whom CAB is not an appropriate choice because of toxicity or renal failure. 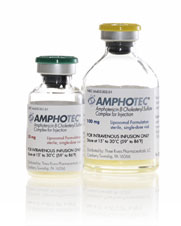 IMPORTANT SAFETY INFORMATION
AMPHOTEC should be administered intravenously. Acute infusion-related reactions including fever, chills, hypoxia, hypotension, nausea, or tachypnea, may occur 1 to 3 hours after starting intravenous infusion. These reactions are usually more severe or more frequent with the initial doses of AMPHOTEC and usually diminish with subsequent doses. Acute infusion-related reactions can be managed by pretreatment with antihistamines and corticosteroids and/or by reducing the rate of infusion and by prompt administration of antihistamines and corticosteroids.

The most frequent infusion-related events after initial dosages were chills and fever. Frequency and severity of adverse events decreased in subsequent dosing.

Warnings and precautions for use in the treatment of diabetic patients It should be noted that each vial of AMPHOTEC contains lactose monohydrate. In the treatment of renal dialysis patients AMPHOTEC should be administered only at the end of each dialysis period. Serum electrolytes, particularly potassium and magnesium, should be regularly monitored.

Interactions with other medicaments and other forms of interaction There have been no reported interactions between AMPHOTEC and other drugs including cyclosporine, However, caution should be used in patients receiving concomitant therapy with drugs known to interact with conventional amphotericin B such as nephrotoxic drugs (aminoglycosides, cisplatin, and pentamidine), corticosteroids, and corticotrophin (ACTH) that may potentiate hypokalaemia and digitalis glycosides, muscle relaxants and antiarrhythmic agents whose effects may be potentiated in the presence of hypokalaemia. The use of flucytosine with AMPHOTEC has not been studied. While the synergy between amphotericin B and flucytosine has been reported, amphotericin B may enhance the toxicity of flucytosine by increasing its cellular uptake and impeding its renal excretion.

Pregnancy and lactation Pregnancy Animal reproductive toxicology studies with AMPHOTEC have shown no evidence of harm to the fetus. Although the active ingredient, amphotericin B, has been in wide use for many years without apparent ill consequence, there is inadequate evidence of safety of AMPHOTEC in human pregnancy. Therefore, it is recommended that administration of AMPHOTEC is avoided in pregnancy unless the anticipated benefit to the patient outweighs the potential risk to the fetus.

Nursing mothers It is not known whether amphotericin B is excreted in human milk. Consideration should be given to discontinuation of nursing during treatment with AMPHOTEC.

BurnsAdler Pharmaceuticals, Inc. announced today that it has entered into a long-term licensing and supply agreement with Three Rivers Pharmaceuticals, LLC for the company's Infergen® (interferon alfacon-1) product.

Begin typing your search term above and press enter to search. Press ESC to cancel.